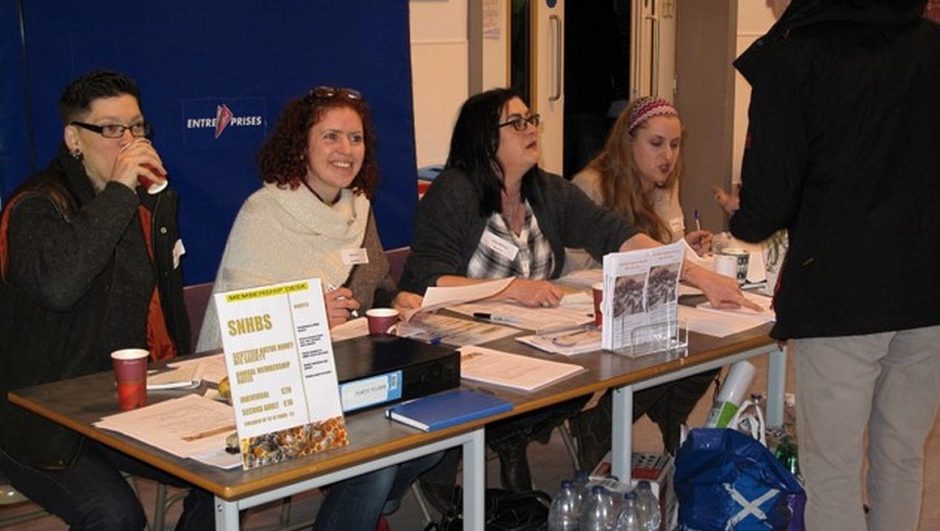 Our annual meeting this year, held on the 17th March, saw 61 of our 181 strong membership join us at Kinross Community Campus to listen to speakers Per Kryger, Jon Getty and Ian Lennox and to participate in the afternoon’s business meeting of the Society. Thank you to all of you who managed to attend despite the dire weather forecast, and also to those of you who got in touch with well wishes for the day.

The speakers covered three areas all of crucial importance to the success of SNHBS. First of all the experience in Denmark which shows a government committed to meeting its requirement under the Convention of Biodiversity relating to honey bees and which initiated research on the island of Laesoe to protect and recover the remnants of their own dark honey bee population. The optimism this talk gave us alone made the day worthwhile.  The second talk by Jon was a tour de force on using mini-nuclei for queen production by one of the most experienced breeders in the UK today and the third was an excellent presentation by Ian showing SNHBS’ own ambition for recovering our dark native honey bees from the brink.

We were privileged this year to have Dr Per Kryger from Aarhus University speak to us about his experience with conflict and resolution in setting up isolated breeding sites for Amm in Denmark. It was his first visit to Scotland so of course we had blizzards and gales to showcase our fantastic Spring weather! Per has worked extensively with bee breeders across various facets of bee research in Germany, South Africa and in Denmark. He is part of a large collaborative EU honey bee project, SMARTBEEs, which may be able to provide some state of the art DNA sequencing for our flagship Conservation Project this year.

Per managed to meet a lot of our members and was really impressed with the enthusiasm and breadth of knowledge in SNHBS. He repeated often during the day that we can’t expect to get everything perfect and planned to the ninth degree. If we wait and wait and wait to start conserving Amm then it will eventually be too late. He was full of encouragement for what we plan to do and I am sure he will be glad to give advice when needed.

The seminar he gave was a real morale boost for those wanting to start isolated breeding sites and improve stocks of Amm. His talk “Diversity in European honey bees: how to conserve it ?” centred on a case study of bee breeding on Laeso, a small island of about 100km2 about 19km off the Jutland Coast. But first he spoke about the different subspecies of honey bees we have in Europe and how to differentiate them by classical and molecular techniques. As well as how the movement of bees has resulted in a high degree of “hybridisation” between subspecies. Something we are all aware of in SNHBS.

So to Laeso. Residence of the last population of Amm bees in Denmark but also, since the 1970s, of Am ligustica. In 1993 it was made illegal to import bees other than Amm in an attempt to protect the dwindling subspecies. The result was a huge protest by the ligustica breeders and a long running legal battle with the state to reverse the decision. After eight years the ligustica breeders lost the case but the Danish government negotiated a peace of sorts, and co-existence between the two camps was planned on the Island. The ligustica breeders would have a mating site on the west of the island and the mellifera breeders on the east.

To control and select the best “types” for breeding, a study group was set up to analyse the genetic and morphometric characteristics of colonies within the Amm population.  About  600 colonies were assessed in the first year with about 200 determined as “mellifera”. Of these colonies the number of genetic markers per sample was plotted to show the proportion of genes from ligustica or mellifera genomes. Each year the top 50 Amm type colonies were selected for breeding. One of the most visually stunning slides that Per presented was the rapid shift over a short three year period from 2005 – 7 in the amount of non-mellifera genes in each colony.

But how to control the breeding? In a small island with two characteristic bee subspecies it would be impossible to have open mating across the island. Instead carefully planned mating stations were selected with mellifera to the far east of the island with a 6km buffer between it and ligustica or ‘hybrid’ zones.

Would this be sufficient?

Per and colleagues monitored the mating site by sending up balloons and nets containing queen pheromone into drone congregation areas. Drones were sampled and analysed and the results confirmed that the sites were free from introgression by ligustica. A remarkable and confidence boosting result!

Per mentioned a few times that if it is possible on Laeso then in Scotland we should be able to find fantastic sites in valleys, peninsulas and islands that can act as mating sites. It’s just a matter of finding them and having dedicated people willing to put in the effort. I think all that were present saw this seminar as a real eye opener in our own efforts in breeding Amm in a controlled manner. When you see it is possible, it becomes far easier!

Per left Scotland with promise to return in the near future. I hope by then we are some way down the road in the Conservation project and in finding suitable mating sites across the country. Thanks are due to Per for travelling across from Denmark during strikes, flu outbreaks and terrible weather to deliver this seminar. We hope to have him back in the future to share – hopefully – positive results of our own case study!

Jon Getty: Raising queens by grafting and the use of Apideas for queen mating.

Jon, the fourth generation of beekeepers in his family, has many years’ experience of queen rearing. He set up and ran communal queen rearing for the Belfast Beekeepers Association and now runs his own queen rearing business based on Irish native honey bee stock. Jon explained the advantages of Apideas, probably the best designed of all the mini-nuclei on the market. He took us through his season, starting with the cleaning up of the previous year’s boxes and the selection of better combs for sterilisation with acetic acid.

In normal seasons he will be inserting drone comb (a valuable resource for the queen rearer) into drone mother colonies in the middle of this month so that grafting can commence at the end of the month.

This year the season is a few weeks behind. He covered the requirements for good mating sites, including sufficient isolation, and discussed apiary vicinity mating, a controversial phenomenon not well recorded in the scientific literature.

Jon explained the filling and the management of Apideas, pointing out that initially they are best stocked with a fresh virgin with wet workers thrown on top whereas after removing mated queens it is better to provide a mature queen cell to maximise acceptance. He then covered the timing of all the management steps, the threats to Apideas, and a range of tips to make queen rearing go well.

Jon has been threatening to write a book for some time – we all encourage him to do so soon! Ian gave us a most impressive presentation on this work he, his family and friends have been putting in behind the scenes to prepare for a launch of the Conservation Project, our big thing for the next few years.  The whole project is envisaged in three phases:

There could be a large volume of data to be handled, even in a trial going out to members only, so with help Ian has developed a system based on Dropbox to manage the images, other submitted data and the assessment process. Look out for more details as our launch day approaches.