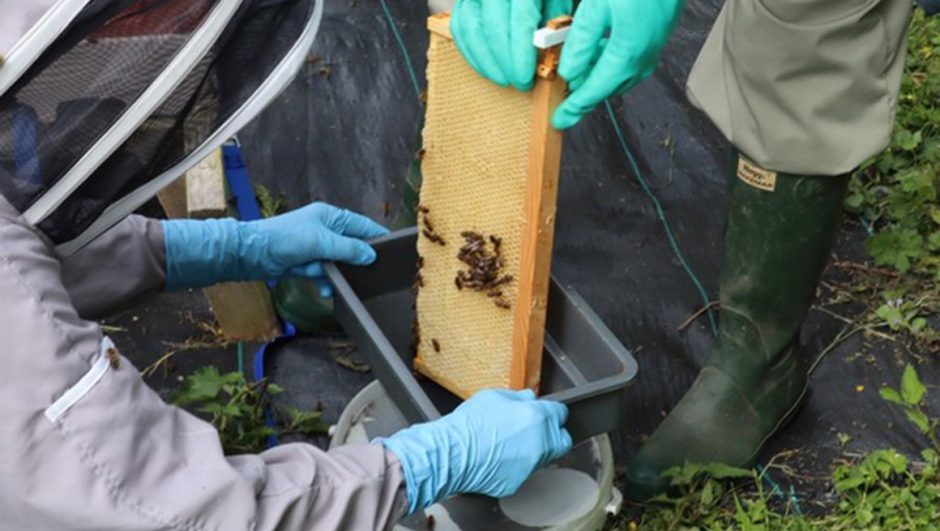 A lovely sunny day greeted the eight participants of the Queen rearing course on the 7th June at Roxburgh in the Scottish Borders. After the initial meeting and greeting it was down to work. A quantity of young worker bees were required to make up mating nucs. Kate has a nifty way to get them off the super frames and into a bucket without too many escaping!  [See header photo]

A short journey later and we were at Morebattle where we were guided through making up nucs for queens raised in a brood-free cell starter/finisher. Kate had followed Clive de Bruyn’s method for this, though she wished she had shaken bees in from eight or nine brood frames rather than the six he suggests.

The queen cells for this had been prepared earlier using grafted larvae. An inspection two days prior had shown eight queen cells had been raised but by our visit three had been torn down. It was unclear why this was the case but in future Kate agreed it would be safer to cage the cells when they are fully formed around day ten. Three of the cells went into double nucs using the frames and bees from the starter colony and the other two went into a double MiniPlus mating nuc. Jim Lindsay had brought a box of young bees with him which were used to supplement those we had collected earlier to fill up all the nucs.

After a picnic lunch we chatted about the importance of the life cycle and role of the workers in rearing queens, raising queen cells and methods of increase. Jim explained the Nicot system to us.

After lunch we practised using a cell punch to supply larvae to go into another starter colony. This had already been made up eight days in advance by removing one frame with the queen on and leaving the other frames with brood in the box. It was checked and all queen cells removed the day before the workshop. Cell punching entails removing a larvae of the correct age from the comb using the cell punch and placing it, with the punch and dowel, into a frame. A much better explanation can be found on Dave Cushman’s website.

At first it felt very fiddly but everyone soon got the hang of it. The frame containing the punched larvae was lowered into the centre of the starter colony.

Many thanks must go to Kate who provided us with a very informative and hands-on day.  I came away with lots to think about and filled with enthusiasm.