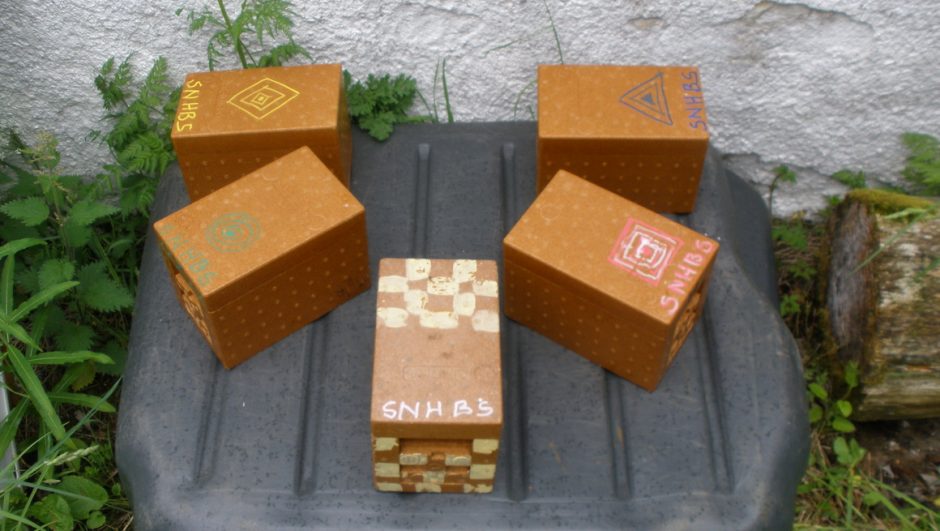 Queen rearing for SNHBS was initiated in May and interested people formed a very loose group in the North East of Scotland, with a good percentage of SNHBS members responding to a request to help out.

A widely dispersed group, all connected by a group e-mail, started to hatch a plan.  Ewan Campbell used information from Bee Base to triangulate potential locations which were at least 10 km from any known apiaries.   The idea was to install Apidea boxes with virgin queens and hope that the virgins didn’t mate, to show the area was truly isolated, with no honey-bee colonies nearby – the first step in the long process of producing Scottish Native Queens.

To do this, Yvonne volunteered to contact the land owners of these potential sites and explain our intentions to them.  She got in touch with Sue at the Cabrach Trust, who was very helpful and interested in our project and offered us two locations.

Sarah and Yvonne, from Tarland Bee Group (TBG), set off to inspect the two locations.  The first was a windy site near the top of a hill, very close to farm buildings, and with a healthy amount of farm manure all around.  The second site was perfect: a very small enclosed courtyard with buildings on three sides and a high fence with a gate on the fourth.  The wall where the Apidea boxes were to be placed, was painted white and facing south – ideal.

For the next step, Ewan and TBG (who had already started their queen rearing programmes for the year) donated Apidea boxes with virgin queens.  We’ve decided that any virgins could be used at this point as we just wanted to establish that no drones were in the area.  Sarah and Yvonne set off for the Cabrach with the precious cargo.

Three weeks into our trial, things were going well.  Two queens had turned to drone-layers, one queen had disappeared, and two were still virgins.  So, no drones around to mate with the virgins.  Our new site was looking promising.

Then – panic.  We had had a call for help from a neighbour just 5 km from our trial site.  A swarm had arrived in their chimney.  Disaster, we really didn’t want bees that close to our site and we had no idea of their heritage.  David Morland and Jenny Lewis came to the rescue and removed the bees from the chimney with the help of the farmer’s tractor bucket, and a ladder.  David also got the chance to use his bee vacuum.  You can see from the photos of the rescue that David had a great time!

To David and Jenny’s delight, the bees themselves looked very native indeed.  The queen was also found and marked with a red spot. The whole colony was re-hived by David and he is monitoring it closely.  The queen was laying within a couple of days of the rescue ordeal.  In the picture of the queen with her helpers, Kitta noticed that the queen’s thorax was dented – probably as a result of the rough and tumble of the rescue (rather than clumsy marking) because two or three of the workers also had dented thoraces.  The workers might have sensed something was wrong because they quickly started building supersedure cells – some of which David broke down.  At the next inspection there was no sign of the marked queen, but later David found a new laying queen which he marked. She would have mated in the Bridge of Don area, so the original genetics will now be diluted, sadly. However, a sample of the original bees was sent off for genetic testing as part of the SNHBS Conservation Project.

Jenny also selected eight tiny larvae from the original chimney colony but, unfortunately, only one got capped in a queenless colony and, sadly, did not make it to emergence.

With the chimney colony removed, we were all back on track with the hope that our mating apiary is indeed in an isolated area without other honey-bee colonies.  After six weeks we had no queens mated and considered this a great start, especially given the perfect mating weather we had over the summer.  Next year we will get some virgin queens up to the Cabrach as early in the season as possible and, if we still have no drones there, we will be in a position to introduce Scottish native queens; flood the area with Scottish native drones; and then cross our fingers.